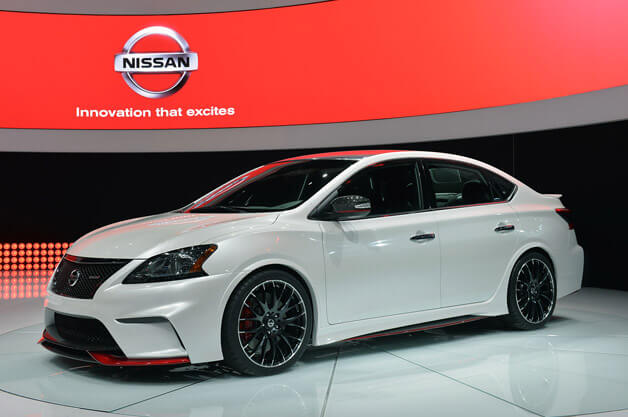 Nissan's Sentra Nismo Concept made its world debut at the LA Auto Show today as part of the Japanese automaker's intitiative to expand its performance line of factory performance models, and it's packing a turbocharged inline four-cylinder engine with 240 horsepower and 240 pound-feet of torque - that's 110 hp more than the regular Sentra.

Of course, no high-performance version of any car would be complete without the suspension upgrades to handle the power, and Nissan has fitted Nismo-tuned suspension and a limited-slip differential to the little front-wheel-drive sedan. With such an increase in power, Nissan wisely chose to swap out the stock brakes for the Brembo calipers and discs from the 370Z. Larger 225-millimeter-wide tires are wrapped around 19-inch Rays wheels and contained within wider fender flares. The steering and six-speed manual transmission also were tuned by Nismo.

The exterior gets new aerodynamic bits, such as a revised front fascia, a chin spoiler and a new rear spoiler, while the interior gets a nice set of Recaro seats and a leather-and-Alcantara steering wheel. For more information on the Sentra Nismo Concept, check out the press release below, and feel free to head over to the auto show photo gallery to see the car up close.